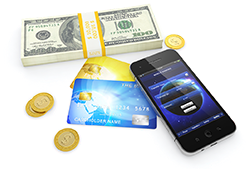 “Pennies (and Dollars) from Heaven”

For eons, financial wealth has been the subject of song, (“If I were a rich man…” from Fiddler on the Roof), script (the films The Color of Money, Glengarry Glen Ross, It’s a Wonderful Life, and Wall Street), and art (“Jesus Removing the Money Lenders from the Temple” by James Edwin McConnell). Thus signifying that humans have struggled with having a lot, not enough, and everything in between, forever.

But having a healthy relationship with financial abundance, meaning money, is rarely the stuff of lyrics and literature. What does that even mean? What does money mean?

Let’s tackle the meaning and judgments around money first, so we’re speaking a similar language.

Despite what we’ve often been taught, money is not good or bad – any more than sex is good or bad. It all depends on how we use it. Does it bring us closer to other people or further away? Offer freedom or fear? Choices or slavery? Security or sleepless nights? Is it a way that we take care of ourselves or get ourselves into trouble? And does it bring us happiness?

Money – the coins, paper, credit cards, debit cards, or gift cards – that you have in your wallet are only pieces of paper, metal and plastic. They are NOT intrinsically good or bad.

So, is money just pieces of paper, metal or plastic? Of course not! These are particular KINDS of paper, metal and plastic that are not interchangeable for other non-money paper, metal or plastic. You wouldn’t give me your plastic VISA card in exchange for a plastic kitchen utensil, like a spatula, for example. Or, if you WOULD, please get in touch with me! Nor would you trade the 5’s, 10’s or 20’s in your wallet for similar denominations of Monopoly game money either.

The paper, plastic, and metal we have designated as mediums of exchange have been agreed to be so designated for this use by our society – just as beads or fur once were in previous cultures. We have agreed that these mediums represent a certain value, or they were once backed by other metals, such as gold, which have a value to us as human beings.

So money has value of a financial sort. Duh! Of course. But if that were the only kind of value it had, we probably wouldn’t be singing and writing about it so much. Money incites a lot of emotion in human beings, as well as a lot of hypocrisy. I love this quote from a man named Vic Oliver:

“If a man runs after money, he’s money-mad; if he keeps it, he’s a capitalist; if he spends it, he’s a playboy; if he doesn’t try to get it, he lacks ambition; if he gets it without working for it, he’s a parasite, and if he accumulates it after a lifetime of hard work, people call him a fool who never got anything out of life.”

Various religions are paradoxical about money too. People with money acquired honestly are seen as superior, even virtuous, but accumulating money is condemned. Like that Biblical quote: “It’s easier for a camel to go through the eye of a needle, than it is for a rich man to get into heaven.” Believers are called on to be altruistic and selfless, while at the same time encouraged to be hard-working and acquisitional – just not too much.

For many people, the concept of money seems to be an either-or, black or white, approach. Either it’s good or bad, sacred or profane. Researchers Belk and Wallendorf (The Sacred Meaning of Money, 1990) argue that an income obtained from work that is not a source of intrinsic delight is ultimately profane, but an income derived from one’s passion is actually sacred. I couldn’t help but wonder where that leaves someone who is passionate about work that is illegal in his or her culture?

I know that this split is found in therapists too – we want to help people AND many therapists have a difficult time reconciling that desire with making money.

But this split is not found just in therapists. Many people have a similar all or nothing mentality regarding money. And because we have to deal with money on a daily basis, we can end up feeling confused about how we should think about it. Is it good or bad?

We think it is good when we say things like:

And bad when we say:

“Love of money is the root of all evil,” “filthy rich,” “burning a hole in your pocket,” “penny pinching,” and “blood money.”

If we are taught that something is bad and good at the same time, the resulting confusion can be too difficult to deal with. So many people opt to refuse to deal with it. We don’t talk about it. Or most of us don’t.

A study done by W.D. Rubinstein in 1981 found that half of her sample said that neither their parents nor friends knew about their income. Less than one-fifth told their siblings. And as income rises, so does secrecy and the desire to cover up wealth.

Celebrities and ordinary mortals seem happier to talk about their sex lives and mental illnesses long before they will talk about their monetary status, salary, or money transactions. That doesn’t make them go away, however. Money may be denied or ignored in courtship, but then argued about during marriage, and as many therapists know, becomes the focus of many embattled divorce proceedings.

It’s past time that we shake off these confusing attitudes about money as a form of abundance and shake hands with a healthier way of relating to money.

Money, whether it’s kept under a mattress or in a stock portfolio, can add to our sense of:

Notice I didn’t say that it will make you happy, secure or free. But that it can add to those values. Why wouldn’t you want it to do so? And if it isn’t, then this is not about your relationship with money (let’s stop blaming that paper, metal and plastic; they are just that – paper, metal and plastic), but about your relationship with yourself and what you think you deserve to create.

If you think you don’t deserve abundance, including financial abundance, even if you win the lottery, you won’t keep your winnings. Many people haven’t for that very reason.

But if you believe that abundance in all its forms is a good thing and you are allowing that in your life, money will flow to you naturally.

What if you are in the first category, and want to live in the second? How do you make that happen? Good question … and the answer is that you have some work to do.

First, go to the source of what you learned about financial abundance. This will help you map out the foundation of beliefs that you are living from. And thus making choices from.

Ask yourself these questions and more: What did your family of origin teach you about money? Did your parents fight about money? Did your mother hide things that she bought because your father would yell? Did you receive only money as gifts, rather than the personal care of a hand-picked present? Did your friends have nicer things (clothes, vacations) than you did? Were you ashamed of that? Did your mother have to work when other mothers didn’t or not have to work when others did?

All of that information is from the left hemisphere of the brain. Important, but not enough. To get to full healing, you need the emotional component of these experiences. You need to include the right hemisphere’s knowledge, and the body’s. You might want to get some professional help with these. As you know, that work can be very hard to do alone. Nor is doing it alone as healing as having a witness.

One of the most common reasons that people hold themselves back from financial abundance is not wanting to outdo their parents, their families, for fear that this will sever or compromise a relationship with them. This is typically unconscious material, and therefore even more impactful, especially if those relationships are already tenuous.

You can create an abundant life for yourself and teach others around you to do the same, and that includes financial abundance. Can you run amuck with that? Of course. That’s true with most things. How do you know if that’s happened? If you aren’t creating happiness and peace for yourself, that’s a sign that you are out of balance. There isn’t a limited pie of happiness. Do the work to bring yourself back into balance (whether it’s missing out on play, or relaxation, or work) and then enjoy, en-joy!

“I finally figured out that the only reason to be alive is to enjoy it.”

Next Month: Abundance 401: “A Course in Keeping on Course: Attracting Abundance.”